In 2013 Ian Golden and Red Newt Racing introduced to the world of ultra running The Cayuga Trails 50. An impressive course, climbing and descending through the gorges of Ithaca, NY. The course climbs Lucifer’s Steps along side aptly named Lucifer Falls, a 115 foot cascade of beautiful rushing scenery.

Through the years runners would take on the 50 mile course and rave of its beauty. Then an idea came to Golden and he said: “There are folks who maybe do not want to, or simply cannot cover 50 miles, or even the marathon distance at Cayuga Trails 50 but still want to see the beauty of the region, that’s where the impetus of Lucifer’s came from.”

Out of the idea of a shorter, yet just as scenic course, Lucifer’s Crossing was born. At the appropriate distance of 6.66~ miles the course heads up the infamous Lucifer Steps straight into the gorge before crossing the creek and heading back down the other side via the surprisingly remote feeling single track of the Finger Lakes Trail.

The race, as Golden describes it takes you up the 1,400 foot climb on Lucifer’s Steps. “The calf and lung burn is tapered only by the beauty of the trail and waterfalls you’ll pass. Runners can save it in hopes of letting it all go on the final flowing 3 miles of single-track, rolling as fast as your quad’s breaking will allow you to move.” 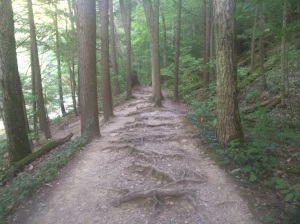 Amy Lord who made the 2 hour trek south from Rochester, NY because she loves running in the Ithaca area said: “The course has a nice mix of hard stuff with some nice easy run-able trail. My favorite thing was probably running through the stream.There was a stretch of just open running on the finger lakes trail that I enjoyed as well.”

After the race, Red Newt Racing hosted a party stocked fully with beverages from the local craft brewery, Ithaca Beer Company as well as a Taco/burritos bar from Gorgers Tacos. The start and finish of the course is in, and surrounded by the campsites at Robert H Treman State Park where many of the runners stayed, giving the event a true trail festival vibe.

Did you miss out on Lucifer’s Crossing? Red Newt Racing has a full calendar of events that you can find here. Be sure to put this one on your list for next summer.