This past Saturday, April 20th, was the 20th running of the Goose Adventure Racing Muddy Sneaker Trail Race, and the first event in the #TrailsRoc Trail Runner Of the Year series (TROY). See our preview here.

20 years ago Mort Nace and Tim Ratowski set out to create a race in the Hi-Tor wildlife region of the Finger Lakes that would serve as a challenge to runners of all abilities and also give something unique that this area had not seen before in a race. That first year, 60 people showed up to what each spring, has become the unofficial kick off to the Rochester trail running season. The event now sells out in minutes.

The 20th rendition of the race lived up to its namesake with 2 inches of rain falling the night before, turning the finish line field into a mud pit that would rival a scene out of Woodstock. The course then became shrouded in a thick layer of heavy fog that stuck around for the entirety of the race, leaving some runners to feel as if they ran the entire course alone . Runners were often able to hear, but not see many of their fellow competitors.

The women’s race was won by Catherine Blondell, 27 of Rochester in 2:01:23 finishing 4 minutes before the next woman would cross the finish line. When asked how she handled the conditions, Blondell put a positive spin on things, “It was so beautiful out there with all of the fog, almost surreal. I felt pretty good until about mile 10, it was very muddy compared to last year, it was a challenge.” She said.

In regards to her win on such a big year for the team from Goose, she said  “It feels so fantastic to win in year 20, this race is so fun I will definitely be back.”

With Blondell taking charge early and so much fog on the course eliminating views from the chase pack, this year the race felt like it was decided in the early miles. The women’s podium was rounded out with Leah Valvo 33, of Henrietta in 2:05:22 and Emily Flagg, 45 of Pittsford in 2:09:24.

The men’s race had a little bit more drama with Eric Boyce, 38 of Dansville pulling away on the later hills to take the win in 1:36:58. He was chased by Jim Mollosky, 43 of Amherst just a bit over a minute behind in 1:38:29.

“I wanted someone else to lead the first few miles as technical roots and rocks are not my strong suits as a runner, but as soon as we hit the roads and hills I knew I could take advantage if I was in position” said Boyce of his win.

“Once we got out of the single track, Eric sort of took control, even with all of the fog I was able to keep him in my sites, I just couldn’t close the gap.” said Mollosky.

Boyce, as well as 3rd place finisher Scottie Jacobs, 43 (in 1:41:17) of Ithaca had never run the race previously which is in stark contrast to 7 runners who have managed to race and finish each of the 20 editions of Muddy Sneaker.

Christina Chavez 47, of Canandaigua was one of the original runners who has come back every year. “The first year a group of us got lost, the forest rangers had to help us to the finish line, when the next year came around I was fearful and I had a conversation with myself that said “when has fear held me back?” so I registered again, and just kind of kept going.” she said

Chaves has seen it all when it comes to the course, but said this year was special, “This was the muddiest I have ever seen it, the fog made it interesting, like it was trying to hide the hills, but after 20 years I knew exactly where they were” said Chaves. 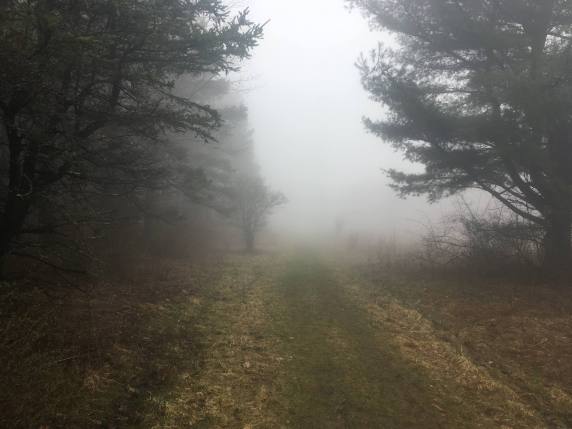 Rick Cronise, 64 of Victor, another 20 time finisher,  says the one thing that has stayed constant is the smiles on the participants faces. “Over 20 years though ya know what has changed? he asks. My age and my speed. I was dead last in the first year, I got my time down to just over 2 hours and now I would be happy to be somewhere between 3 and 4 hours.”

Mort Nace, the big booming voice of Goose Adventure Racing for over 20 years was contemplative and quiet when asked why he has done this year after year for 20 years, mostly he was talking about the community. “2 guys who weren’t sure they knew what they were doing found themselves surrounded by an amazing circle of people who show up year in and year out to help us put on what we think is a pretty great event.” He said

“Today was a pretty special day to be out here” said Nace- “This was a top muddy event for us. We got what we wanted, epic mud and a  great group of people celebrating at the end together.”

At the end of the event as Nace handed out prizes to age group winners almost everyone had stuck around to cheer and enjoy the day. Runners presented Mort and Tim with a giant thank you poster with signatures from the runners with pictures of the pair sitting on the same rock, separated by 20 years. 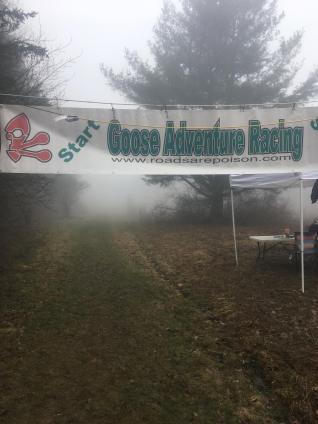 The next event in the TROY series is the Medved Madness Trail Race – 15 miles of fun in Mendon Ponds Park with the best post race BBQ around!